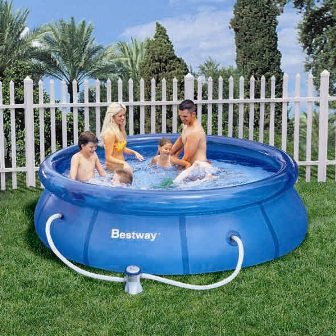 Yesterday was one of the stops for our official start to summer – picking up the small, inflatable pool that our daughter is going to be in for most of the next few months. Normally we just get one of the $20 inflatables that are big enough for her to sit and jump around in, but the one to the right caught our attention. For $45 at HEB we got one that’s about 2.5 feet deep and 10 feet in diameter.

It’s a Bestway, which probably isn’t the best brand. But it’s working so far. It’s short enough that it doesn’t need external bracing. The inflatable ring on top is enough to keep it together. Although I’m going off of what the box says since we’ve only had it up a little over 24 hours.

And while on the topic of time, the 10 minute setup time that’s on the box is way over optimistic. 10 minutes might be right for getting it together, but filling a 900 gallon pool with a water hose takes a long time. It’s one of those things I expected going in, but was really hard to explain to my daughter.

Overall though, for about 50 bucks an above ground pool this size with a filter was too much of a deal to pass up, even if it doesn’t hold up more than one summer.

Oddly, Amazon has the same pool for $130, so if you’re near an HEB that might be a better bet.