Cannot Communicate with the Scanner

A few months ago I bought an Epson DS-510 scanner to try and keep up with the ever growing mound of paper that you deal with. And overall it’s been a great scanner. It’s fast. Scans duplex. And the scans look good. But there’s been one nagging issue and that’s a Cannot Communicate with the Scanner error message.

If my computer went to sleep or I unplugged the scanner to move my notebook, the next time I plugged it in I’d get the dreaded Cannot Communicate with the Scanner message and would be unable to scan until I restarted my computer.

I tried all the fixes that Google found for me. Swapped out cables. Tried different ports. Reinstalled drivers. Nothing seemed to work.

Then I came across a site that had the fix. And I’d love to link you there, but I forgot to bookmark it.

And it’s a pretty easy fix. What looks like was happening is that the Windows Image Acquisition (WIA) service was hanging up. In the services list it showed as paused, which was a little weird.

So, on to the fix. First go to the Task Manager. Easiest way to get there is press Ctrl-Alt-Delete and pick Task Manager from the menu that comes up.

Find the Windows Image Acquisition (WIA) process and select End Process. You’ll get a nasty warning from Windows. I’ve just ignored it and haven’t had any issues. Can’t promise you’ll have the same luck. 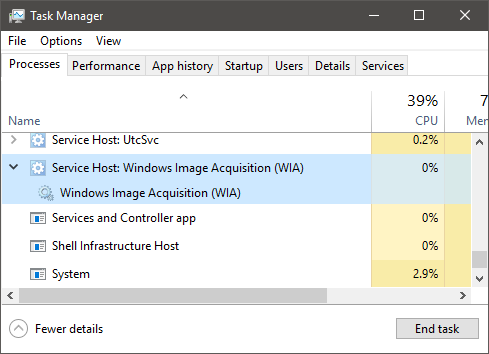 And, you may be able to skip ending the task. But I had to do this for the next step to work.

Now you want to go to the Services list. Easiest way to get there is bring up the start menu and start typing Services. You can also get there through the Administrative Tools.

Once there you’re looking for the same Windows Image Acquisition service that you just ended. It’ll probably show Stopped. (It shows running here because I had already restarted it)

Or, from the command line

The second step is too many clicks for me, so I wrote this little batch file to handle the restarting for me.

I’ve got it pinned to my start menu and set to run as an administrator. When it runs it tries to stop the WIA service and then restart it. My hope was that this batch file would take care of both steps above, but doesn’t seem able to actually stop the service when it’s hung up. So I do the first step through the task manager and then run this script to restart.

And, assuming it comes back up, that’s it. I’ve done this a dozen or more times by now and it’s worked every time.